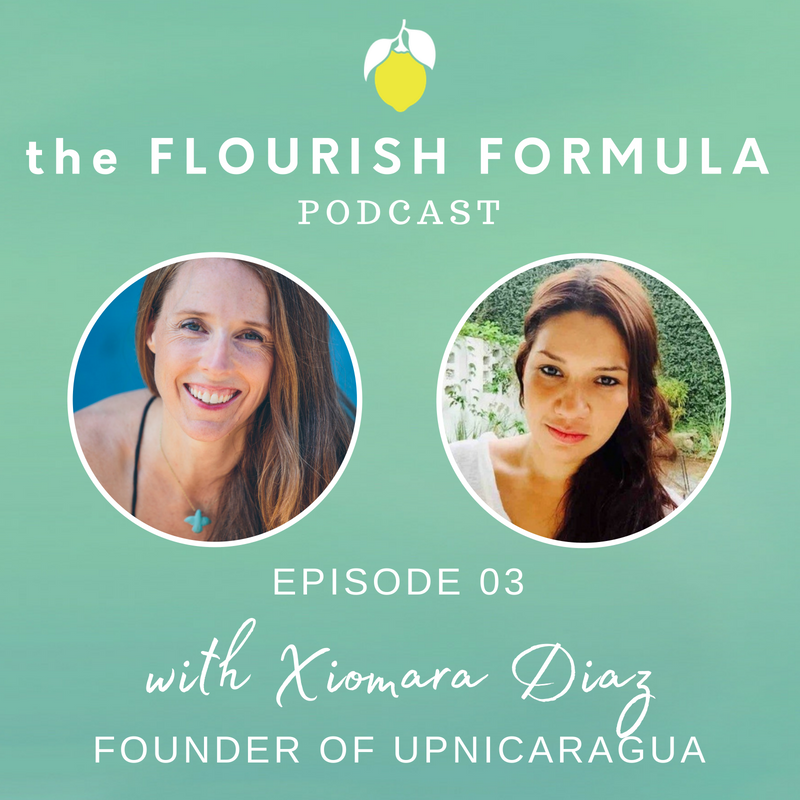 I’m so happy to share with you the third episode of The Flourish Formula podcast. In it, I interview Xiomara Diaz, the innovative leader behind UPNicaragua, a mentorship program for girls at risk of trafficking in Granada, Nicaragua, and one of the beneficiaries of the proceeds of The Flourish Formula (Now available in PRINT.) In today’s podcast, we talk frankly about the heartbreak and challenges of the situation in Nicaragua, plus the inspiring project she has created to holistically mentor girls and an exploration of social enterprise as one vehicle to change the world for the better. I know you will find Xiomara as inspiring as I do!

You can listen to the podcast here.

{And read the notes from our talk below.} 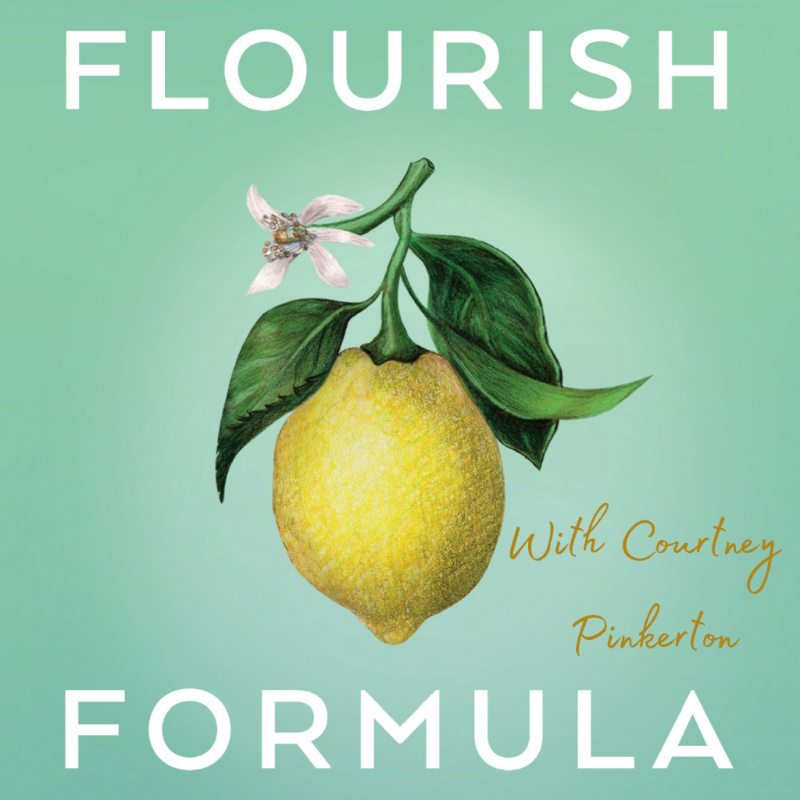 Meet Xiomara, the founder of UPNicaragua, The Garden Cafe, and A Thousand Cranes!

Flourishing is not a solitary sport
– Courtney Pinkerton

What is currently happening in Nicaragua?

Xiomara: On April 18, 2018 the current Nicaraguan government tried to enforce a reform that would greatly impact retirees and employers offering retirement benefits — there was a response by citizen groups across the country so the government responded with repression and several days later a protester died. Since then more than 300 people have died, 1000+ have been injured, 150 are missing; essentially chaos has ensued throughout the country. While it started out as being about the reform, after several days of protests the government stopped the reform, but at that point, several people had been killed, human rights were violated and the Nicaraguans were realizing how much they’d lost over the last 11 years under the current regime. They realized they didn’t live in a democracy that they thought they did.

Courtney: The majority of the protesters were students, and it was amazing to see them standing up for their rights and speaking out about the injustices in such articulate and eloquent ways. To watch those who initiated the awareness stand up to power and to speak so articulately these common human desires has been one of the most moving and courageous examples of the human spirit. To see them be able to mold and shape the policies that govern their society is truly moving.

UPNicaragua is a non-profit social enterprise focused on the empowerment of young girls in Granada, Nicaragua. Since 2015, we have been creating long-term education and mentorship opportunities for girls in our community. UPN invests in Nicaraguan girls who are talented and have leadership potential but lack access to resources, opportunities, and a strong community. All education opportunities are generated through the sales of our handmade products. 100% of profits are invested in supplementary school programs and scholarships.

Xiomara: Education is the single most important thing for the development and sustainability of a democracy. Being an entrepreneur in a tourist destination I worked to fight against sexual exploitation in Granada and in that process I came close to girls who’d been highly exposed to that world—some had been at high-risk for exploitation and others who’d already been trafficked. I began to analyze how they came to be in those situations and it came down to the conclusion that they had a lack of access to not only education but a strong community and strong role models. They were disconnected and part of a cycle that was really hard to break if you’re not exposed to anything other than that world.

I started a campaign in 2011 to bring awareness, and then in 2014 decided to do more and started to provide an educational opportunity that could not only help girls in that process but prevent them from happening in the first place. That’s when I started working with mentors and mobile programs to create UPN. We opened the opportunity to those girls for scholarships and community to those who were in the entrepreneurial community and were citizens that were doing good in the community.

We invest long-term in every girl, the scholarships come with daily tutoring, companionship, helping them adjust in their new school, and the processes that they go through as they improve and become more aware of their own personal battles.

Courtney: There is such an artful design in creating this social entrepreneurship model and the type of support you offer these girls. Both in the sustainability of Nicaragua but also in the incredible care with which you see and respond to each of these young women which you see as individuals and offering interventions and supports that are designed to help them flourish. To not only offer skills to them but also emotional support, it feels so holistic. Was that because of conversations with other leaders you worked with or where’d it come from?

Xiomara: That definitely came through programs I’ve gone through, mentors and education I’ve had. The educational aspect is only a piece of it, the emotional part is more delicate and subtle and is something we could miss. The emotional part came through listening, we started really small and through that process, I was with the girls every day for hours listening to them trying to figure out what I could do for them. It was a natural unfolding answer because what you want for them ultimately is to flourish in life. It’s not necessarily a path, and I was listening to them I knew that helping them get there wouldn’t be solved with just a check.

We have to do a lot more for the girls. Being a social enterprise, being a sustainable program that was able to generate its own funds took the pressure off having to view the results in a certain way and certain time. My only agenda is how to really make these girls succeed, really flourish in life, how to stick to the program and that they’re happier people and can influence their community. We have a plan but we’re flexible when we need to be.

Courtney: When people ask me about the main outcome of the Flourish Formula Coaching Program I say resilience; it’s a combo of strength and flexibility which is what I can see happening with what you’re doing in UPN. Given all the challenges they’re facing and will face, how can you build up something deeply strong inside them and the capacity to grow.

Courtney: Let’s dive into social enterprises—what exactly is it, and can you unpack how you’ve gotten your funding for UPNicaragua? How you’re earning the income that supports the program which then supports the girls.

Xiomara: When I had the idea for the program, I said ‘I don’t have the fund but I do know how to do this, this’, and this because I’d been an entrepreneur for a while. Back in 2007 we started the Garden Cafe and were thankfully successful with that, so I asked myself if I can start a business that generates revenue to support it, why can’t I do the same thing to support a cause that is close to my heart? I looked at what I’m good at, what I tools and entry points I had as an entrepreneur and came up with a business model for designing and working with women artisans who’d then sell those products to the tourism industry.

We started small designing simple bracelets and sold them in various tourist cities in Nicaragua. We started small and only grew as our social enterprise grew. It’s still a process and we’re still figuring out how to make it grow and diversify. Right now it’s getting difficult to do that because of the political unrest which is when the tourism market crashed and we’re right now having to figure out how to iterate and find new markets for our product. We’ve started moving into more than just bracelets and it’s such a joy to that 100% of the profits support this and that we can not only do that but also hire women and create jobs for them. Business for good makes a lot of sense.

Courtney: I started out in a nonprofit but I was really interested in social entrepreneurialism. So once I started Bird in Hand Coaching, I wanted to be a socially conscious business owner, and at every turn and opportunity I had to redirect attention to a social cause. It links head and heart.

A lot of listeners may be at the point where they’re thinking how can you both take care of yourself, your family and do good in the world and not lose yourself in the process, so I think this is a really great example of how you can do that.

I also just wanted to say that The Garden Cafe is where I hosted my book launch when I had a Flourish Live Retreat in Granada, it’s my children’s favorite restaurant and the first one we came to when we moved to Granada. So while there are so many layers of connection we have and unfortunately didn’t have a chance to cross paths with Xiomara while we lived there I’m so happy to be able to have her on this podcast.

Xiomara: In this time for me while I’m undergoing hard times because of the trouble in Nicaragua it’s been amazing that despite all of it I feel really rooted and think that has a lot to do with being very connected to my driving force and the purpose I feel in life. It’s really hard to despair when you’re connected to your driving force.
Invest in finding what your driving force is in your life. That will help you be deeply rooted and make it hard to despair in hard times. 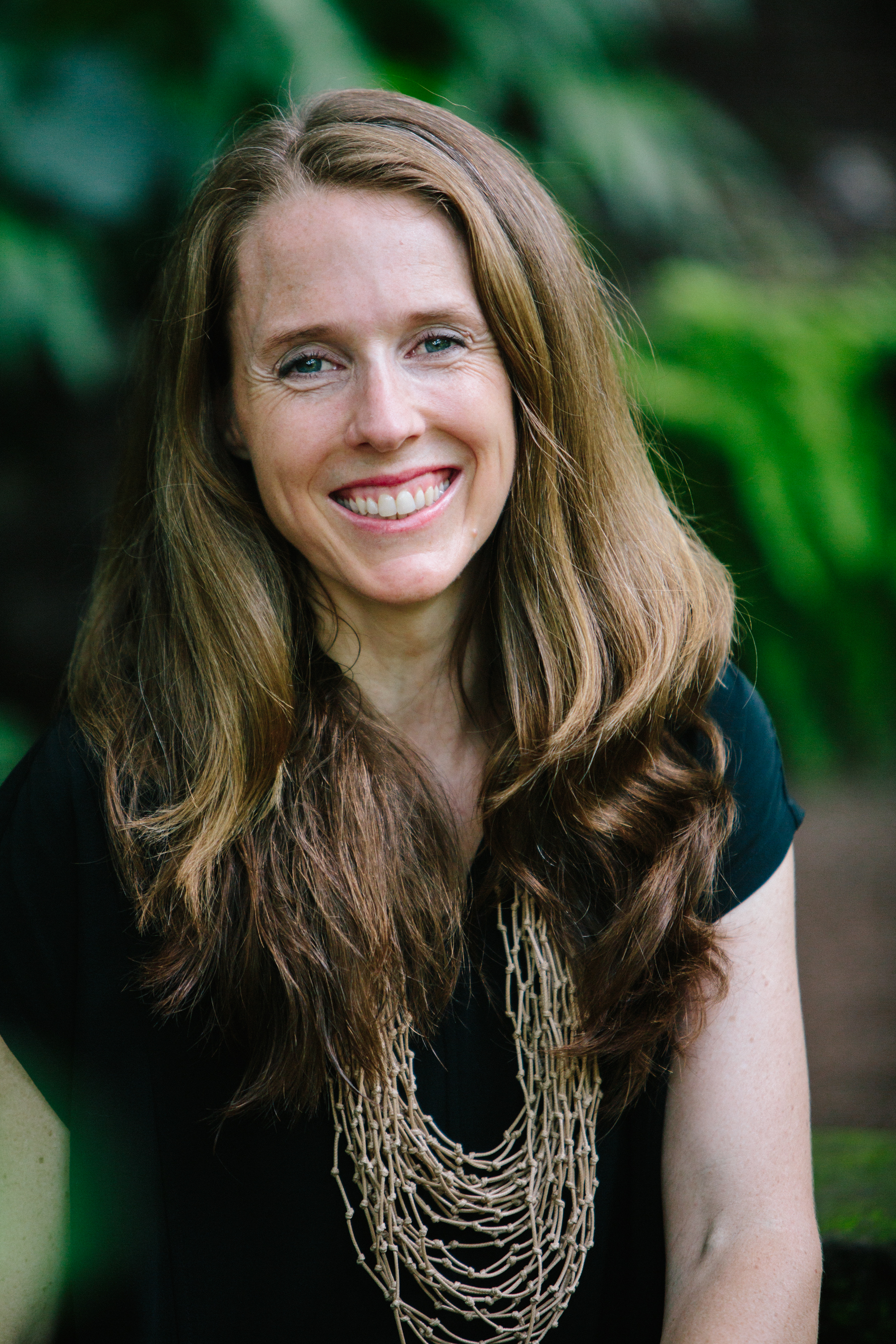 Courtney Pinkerton is a certified holistic life coach and the author of the Amazon bestseller, The Flourish Formula: An Overachiever’s Guide to Slowing Down & Accomplishing More. Courtney is a student and a teacher of the Enneagram who has helped hundreds of conscious women, and a few inspiring men, pursue their most salient goals and discover more pleasure in the everyday. She has dual master’s degrees from Harvard Divinity School and Harvard Kennedy School, is the creator of the flourish coaching methodology and the Flourish Formula for Families. After selling their house and all their belongings and spending a year adventuring in Nicaragua tutored by their neighbors in the art of slowing down and living more, Courtney and her husband Richard Amory and their three children are making their new home in a co-housing community in Asheville, North Carolina.

Want to get the latest from Courtney?

Sign up here and receive a digital copy of The Flourish Formula... Which has earned Amazon best-seller status in Meditation, Time-Management and Life Skills!!

an eight step process to slowing down and accomplishing more 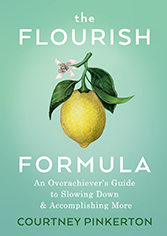 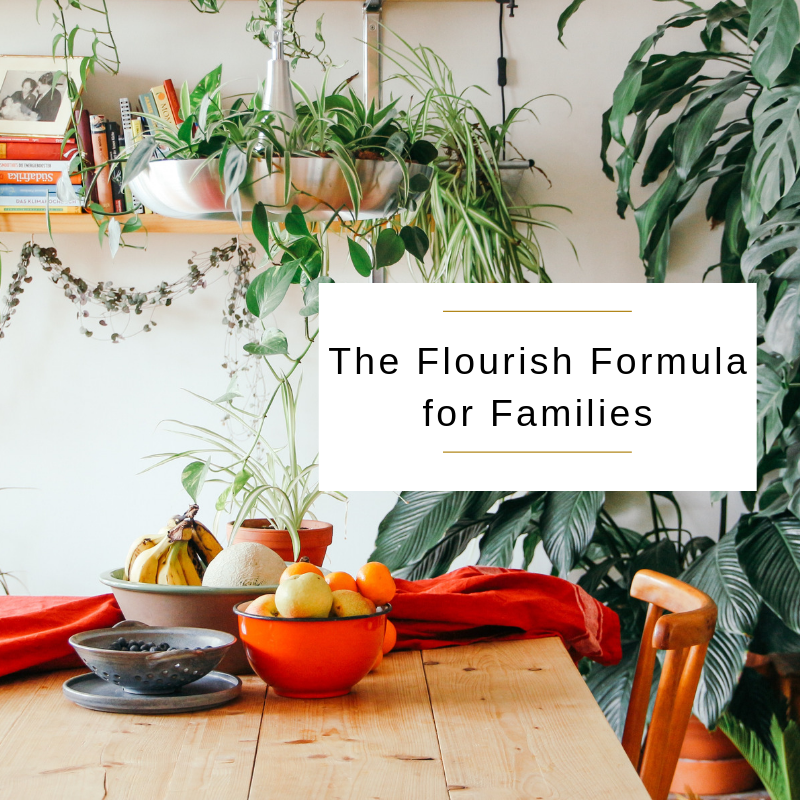